The Archbishop Metropolitan and Primate, Church of Nigeria (Anglican communion), His Grace Most Rev. Dr Henry Ndukuba, yesterday urged the All Progressives Congress, APC, to review its decision to field a Muslim-Muslim ticket in the 2023 presidential election. 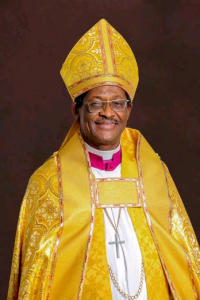 Ndukuba, who briefed journalists in Abuja ahead of the 4th Standing Committee meeting of the Church, following its 2020 General Synod, said the decision meant that the party was insensitive to the feelings of the people.

The Primate said as innocuous as the idea of same-faith ticket might sound, the country was not ripe for it.

He said: “We are totally opposed to it. When you appoint or choose people of the same faith, either Christian-Christian or Muslim-Muslim ticket, you are being very insensitive to the feelings of the people. For us, it portends danger.

“Until we are able to deal with the issues that are causing disharmony and distrust in our nation and be able to provide credible leadership, we cannot pretend that we must be able to live above these sentiments.

“It is one step at a time. Do the needful. Give credible leadership that will win the confidence of the people, and then; when you tell us anybody can rule, we will agree.“

“It is unwise to continue to promote those things that further divide the country. There is a need for politicians to be sensitive to the feeling and aspirations of the people. Nigeria is a secular state and great efforts were made in the past to ensure that it remained so.”

Ndukuba also decried the breach of power rotation agreement by some political leaders, warning that religion and tribal issues were still volatile areas of the national life of the people.

“In addition to the Muslim-Muslim ticket, the inability of the political parties to abide by previously agreed Code of Conduct has constituted one of the contending issues in the current raging debate on exclusion in governance.“”There is the need for inclusion and participatory governance to reduce marginalisation and agitation for self-determination.”

The religious leader condemned the nomination of alleged members of the ruling party into the Independent National Electoral Commission, INEC.

According to him, it is unacceptable because it cancompromise the fairness of the electoral umpire“”It is clear that Nigeria is bleeding and has been severally said, we cannot afford to lose this opportunity of voting in selfless, honest, capable leaders to turn the tide,” he said.

The cleric also cautioned that Nigeria could not afford to play with its human capital assets; adding that it was high time the Federal Government rejigged the education sector to ensure it worked for majority of the people.“According to him, “Nigeria has a deficit in education by having over six million out of school children with no capacity or potential to be self-sustaining. This is certainly a time bomb which should be addressed very urgently.

“The earliest resolution of the ASUU strike and our children returning back to schools is an urgent matter of concern.”

In the same vein, the Anglican Primate said the health sector has become a shadow of what it should be.

Given the global economic downturn, he suggested that political leaders should tackle corruption headlong, cut down the cost of governance and re-channel the much needed funds to revamping the health sector and to assisting vulnerable populations especially the youth.

“We encourage the State and Federal governments to look inwards and tighten the noose and sanction first public officials who engage in corrupt acts so as to serve as a deterrent to others,” he added.

Ndukuba argued that nothing can be done industrialisation and building a strong economy without stabilising the power sector.“To address the issue, he insisted that there is the need for closer scrutiny on past abysmal performance in the power sector in order to correct past mistakes and close yawning gaps if the country is to be able to make appreciable progress.“The Anglican Primate explained that the forthcoming Standing Committee Meeting of the Communion with the theme, ‘Your kingdom come, Your will be done Matt. 6:10’, would provide a platform for representatives of the Church to review its past activities and programmes as well as national issues that affect the church and its numerous adherents and followers.