The man that goes with the sobriquent, “Ofor Ndi Igbo” , and a leading Governorship aspirant under the platform of the People’s Democratic Party ( PDP) in Abia State, Chief Ncheta Elvis Omerekpe, has lauded the Governor of Abia State, Dr. Okezie Ikpeazu, for his thoughtfulness in deciding that the next Governor of the State, should come from Isiala Ngwa North. 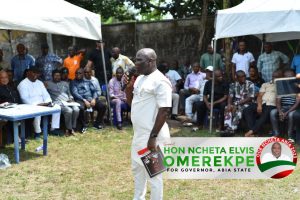 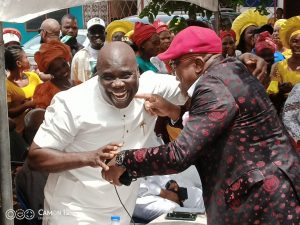 Omerekpe stated that, this benevolence by the Governor, has presented him as an intelligent and visionary leader who takes cognizance of hard work, noting that as such, he Ncheta Elvis Omerekpe, is however the most eminently qualified candidate among all in the race suitable to mount the saddle of the State under the PDP come.2023. 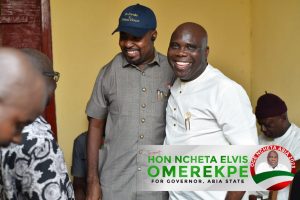 The renowned philanthropist and business mogul who stated this on Friday at the PDP party Secretariat in Obingwa LGA during an interface with critical stakeholders, Counselors, delegates and party faithful, noted that his insistence on being the next Governor of the State, is borne of his stunning performances over the years in human and capacity development. 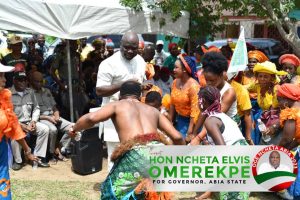 Omerekpe who challenged other aspirants in the race to show their achievements, reeled out his achievements which include: distribution of Over 400 motorcycles to Abia youths, construction of asphalted roads, on – going and some completed measuring over 32 kilometers roads with bridge and drainages, Solar borehole drilling, treatment of over 50 thousand Abians through his free medical outreach and many more. 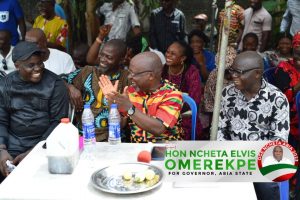 He stated his contributions during the Covid-19, informing that he bought more than 20 thousand bags of rice and shared to all the LGAs in the state to ameliorate the sufferings of households during the said period. 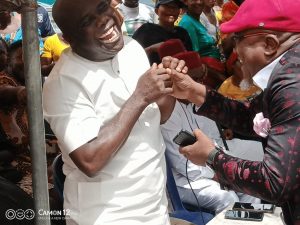 Chief Omerekpe said he has decided to present his scorecards to show Abians that he is qualified to be their next Governor, stressing that service to the people demands being sincere and open to them in the handling of their affairs, maintaining that his modern town halls, skills acquisition centres are testimonies that he has the interest of Abians at heart and will serve them diligently if elected.

He promised to create employment for youths in Abia State, nab kidnapping in the bud, through creation of jobs.

He reiterated that if our youths are meaningfully engaged, kidnapping and other crimes in the society will be arrested, informing that studies have shown that youth who perpetuate crime in the society are idle just as he revealed that he will synergize with town unions, Ndi Eze to nab kidnapping if voted as Governor.

On infrastructure, he assured that he will be the first Governor to bring Julius Berger to the state for the purpose of changing the infrastructural deficit in Abia, pledging to also improve the Health and Education sectors of the State if elected Governor.

He stated that he has spent huge resource over the years in achieving these objectives, maintaining that he has set standards that other aspirants cannot achieve, challenging them to present their scorecard that makes them more qualified than him.

Responding on behalf of members of Obingwa Legislative Council, the Leader, Hon Victor Ikechi, thanked Chief Omerekpe for speaking expressly, stating that if the party’s ticket were in his hands, he will not hesitate to give it to him, expressing optimism that he Omerekpe will come at tops at the party primaries,

Hon Nwoke, urged him to sustain the relationship with Obingwa people and the Governor, maintaining that God will perfect all regarding his ambition.

On his part, the Party Chairman Obingwa LGA, Elder Seth Agumuoo, said his visit has reflected that he is not in enmity with anyone from Obingwa, stressing that the Governor’s decision of where power moves to, favours him, assuring that as party men, they will take decisions that will favour Ndi Abia and the party, expressing optimism that God will give Abia a good Governor in 2023.