The Senate Minority Leader and Senator for Abia South, Enyinnaya Abaribe, has vowed to remain in the vanguard for the agitation of justice, equity and fairness for the South East in National affairs despite all odds. 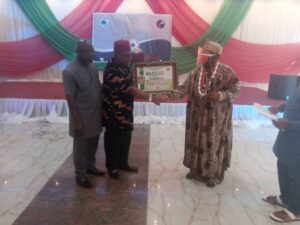 He argued that giving up the agitation to accord the zone equal opportunities with other parts of the country would deepen their already existing pitiable condition and thus subject her people to second class citizens.

The senator, who stated this after being presented with a Legacy Merit Award as the “Most Outstanding Performing Senator in the South-East 2020,” by the NUJ, Imo State Council, insisted that the quest for a president of Igbo extraction in 2023 was non-negotiable. 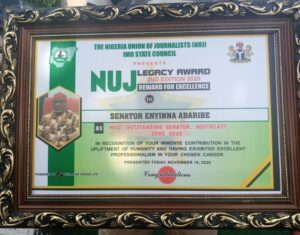 Represented by his aide, High Chief Chijioke Ukoh, the Senator however, enjoined the Igbo not to relent but to remain firm, resolute and undaunted in the face of legions of challenges, assuring that light would definitely appear at the end of the tunnel one day. 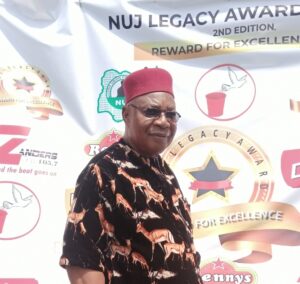 “The Legacy Award is an appreciation and the reward for good work is more work.

” _Please continue to be fearless, objective and constructive in the discharge of your duties as the watchdog of society in line with the ethics of your noble profession”, Abaribe urge journalists_ 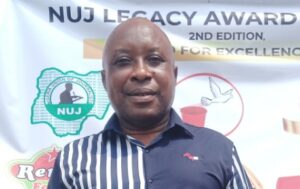 Governor Hope Uzodimma, who spoke through his Commissioner for Information and Strategy, Declan Emelumba, said that an annual merit award for outstanding journalists in the state would be instituted by the state government next year.

This, he said, is to appreciate and to spur such shining stars in journalism to greater height.

The governor said that he had taken steps to reposition government-owned media houses in the state for greater efficiency and productivity and assured the journalists of government’s sustained support.

Chris Isiguzo, the National President of NUJ, represented by the NUJ Chairman, South-East Kenneth Ofoma, described the union (NUJ) as an international organisation that mirrors the society.

The NUJ boss, who commended Governor Uzodinma for reviving public mor¬ibund media houses in the state, enjoined politicians of South-East extraction to close ranks for the actu¬alisation of a president of Igbo extraction 2023.

capital one has a no cash advance fee card fcgazvofbldKeewsBtjOpifso