2023: “I Will Achieve The Abia of Our Dream, If Elected” – Says Omerekpe As He Visits Umuahia South

A governorship aspirant under the ruling People’s Democratic Party PDP, in Abia State, Chief Ncheta Elvis Omerepke, has highlighted the decays in Abia State ranging from non-payment of civil servants, pensioners, bad roads, poor infrastructure among others, pledging to make Abians smile if elected as Governor. 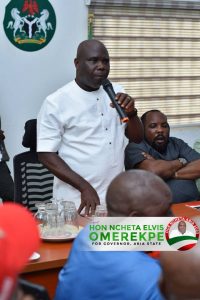 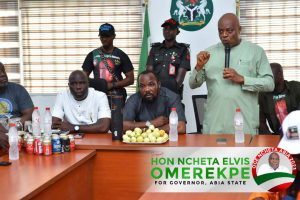 The vocal aspirant stated this on Saturday at the Umuahia South Council Headquarters, adding that if a public office holder, refuses to pay salaries of workers and pensioners, and they keep on dying in large numbers, he has committed murder. 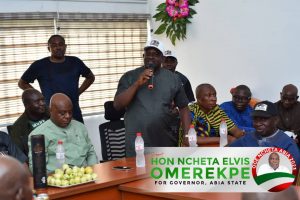 Chief Omerepke who used the opportunity to present a brochure of his scorecard in the last 17 years to the people of Umuahia South, said politics has gone beyond refusing to show your achievements and scorecards to the people, revealing that people will assess you based on what you have done to better their lots. 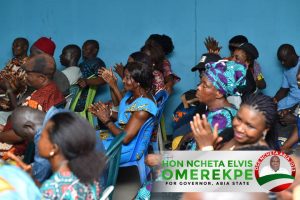 He informed that he has spent over 7 billion in the past 4 years, touching the lives of the people, drilling solar boreholes, embarking on road construction, just as his presence has been felt in the area of social development while also recounting his contributions in the area if social intervention on the wake of COVID-19 pandemic where his foundation distributed incentives to Abians. 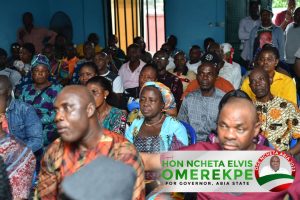 He urged Umuahia South stakeholders not to be deceived as stakeholders and delegates into believing that there will be instructions to vote for a preferred candidate, stating that he is eminently qualified to carry the flag of the party, as he track record speaks for him. 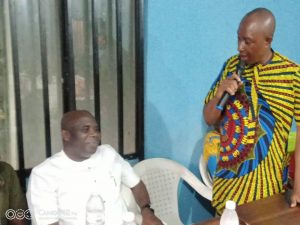 Omerepke harped on the need for PDP to field a credible candidate in the 2023 election, stating that any mistake at fielding a candidate against the wishes of party faithful, stakeholders among others may end the party’s dominance in the State.

Responding, a stakeholder in the area, Mr Ndukwe Adindu, said Nigeria is practicing democracy where everyone has the right to choose where he or she wants to be. He prayed for God’s divine plans to be made manifest in relation to his Governorship ambition while also urging him to seek God’s face.

Meanwhile, at a meeting with Delegates at the party’s office, Mr Chidiebere Nmerengwa, who spoke on behalf of other Delegates, said they are not ignorant of the mammoth projects he has embarked on over the years. They assured him of their vote while praying God to guide him in his ambition.