The candidate of Action Peoples Party, (APP) Hon. Signor kanu has vowed to defeat all the candidates from other political parties, to win the Abia south senatorial seat in 2023 general elections. 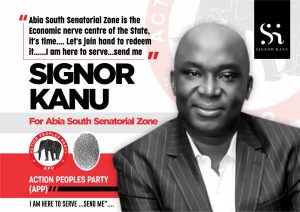 The former All Progressives Party (APC) Chieftain made this assertion in Aba, Abia state while interacting with the media. Hon. Kanu said, he is in the race to win and not to appear as a poster boy.

When asked about some other candidates like the incumbent Senator representing the zone, Sen. Enyinnaya Abaribe, who recently defected from the Peoples Democratic Party (PDP) to All Progressives Grand Alliance (APGA) and the incumbent Governor of Abia State, Dr. Okezie Ikpeazu who is running under the People’s Democratic Party (PDP) and Engr. Chinedu Onyeizu of the Labour party, Hon. Kanu said he has respect for all the Candidates and indeed in good terms with all of them, especially Sen. Enyinnaya Abaribe, but that he has advantage coming from Ukwa with two Local Government Areas and believe Ukwa person will be considered by Abia south senatorial zone teeming votes from the six Local Government area as he believes strongly its the turn of Ukwa to produce the next Senator for the zone. 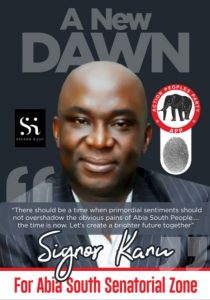 Reminded that his party, the Action Peoples Party, (APP) is new in Abia, Hon. Signor kanu while acknowledging that APP has built solid structures in Abia, cutting across all the 17 LGAs, he said the 2023 general elections will not just be about structure alone, rather personality and variable factors, insisting as Aba boy (Nwa Aba) that he knows the challenges and problems of the people from his senatorial zone and promise not to let them down if elected.

Hon. Signor kanu was born fifty years ago and hails from Umunteke Asa in Ukwa West L.G.A of Abia State. He is the third Son of Late Sir & Lady John Ekeke Kanu (KSA) Akurulo 1. His quest for knowledge saw him obtain various educational Certificates from Ozar Secondary School, University of Calabar, and Queen Business School, York Canada among others.

Professionally, Signor was a banker having worked at FCMB and Enterprise Bank where he held various positions cutting across many sectors. He was once Head of Trade & Investment Consulate of Central Africa Republic C.A.R. and currently the Country Director of Habitat in Nigeria.

Hon. Signor kanu is a Director in other organizations such as Breadmart Inter. Services Ltd (makers of Orient brand of Products), Westwood Hospitality Ltd (Owners of Westwood Hotel Brand), Mac Reeds and Tom Consult, among others.
Hon. Kanu is devout Christian and a member of the Redeem Church of God (RCCG )

He is the founder of Signor Kanu Foundation-SKF with numerous charity projects to its credit. He said he will make laws and attract projects that will be impactful to the six LGAs that make up Abia South Senatorial zone, with job creation and empowerment of youths as one of his utmost priorities.

He is happily married with four children.