As the battle for who wins the Governorship ticket of the ruling People’s Democratic Party in Abia State gets more intriguing, a leading aspirant with huge support from Ndi Abia, Chief Ncheta Omerekpe, on Saturday, assured that he will bring Julius Berger to fix roads in Abia within the first 24 months in office as Governor. 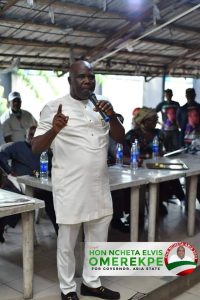 Chief Omerekpe made the pledge while addressing stakeholders and delegates from Aba South and North at Aba Sports Club and Hotel De La Paix respectively.

The renowned philanthropist who started his early life in Aba as a businessman, recalled in nostalgia how Aba played host to traders from Togo, Benin Republic, Niger Republic among others, stating that those good old days have fizzled away as Aba has remained in dilapidated state. 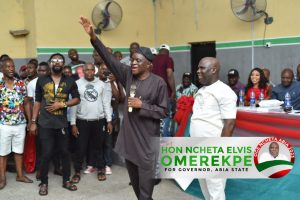 He revealed that no town in South-East generates revenue more than Aba, frowning that Aba is now a dead city due to neglect by successive administrations in the State, assuring that he will fix Aba by bringing Julius Berger within the first 24 months in office if elected Governor. 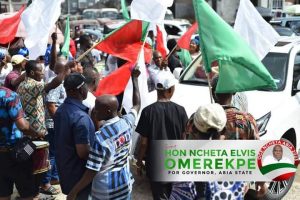 The Ofor Ndi Igbo as he is fondly called by supporters, pointed out that Faulks and Port Harcourt roads in Aba, are the worse hit in Aba, stating that a fix of these key areas, will further open up Aba to other States in the South-East as key businesses are done in these areas. 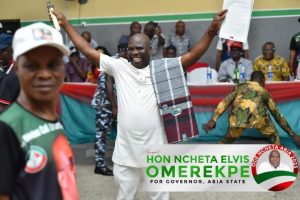 He noted that the major problem confronting Abia is the tradition of imposing a candidate on the people in negation of their plights, saying that this hydra headed monster, has angered and forced people like him to join the race so as to effect the positive transformation that has eroded Abians for years. 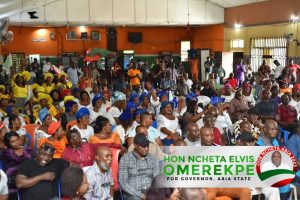 Chief Omerekpe told the delegates that the challenges ahead in liberating Abia is a herculean one, but expressed optimism that with their support, Abia will smile like other States in the federation.

The business mogul used the period to present his documented scorecards in the past 17 years including donation of over 400 brand new motorcycles to Abia youth, distribution of over 150 thousand bags of rice to Abians during COVID-19 era, treatment of over 50 thousand Abians across the 17 LGAs through his foundation. 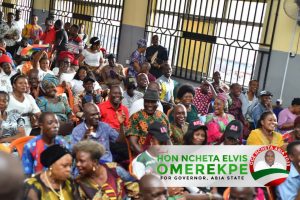 He informed the stakeholders and delegates that he has these past years, constructed 32 kilometer roads, done drainages including the ones that government could not do, built hospitals, drilled solar boreholes across board, stating that he is a detribalized Abian who has taken his philanthropy to all the LGAs in the State. 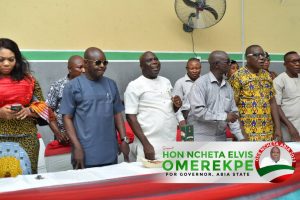 Omerekpe promised to improve the health, security and education sectors of the State by bringing robust policies and solutions to ameliorate the sufferings of the masses in this regard, revealing that he will partner traditional rulers, town unions to improve security in the state while also pledging to create jobs for the youth to nip kidnapping and other crimes in the bud. 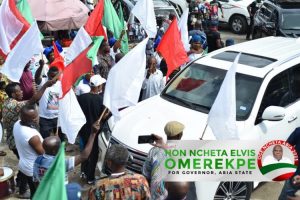 He appealed to stakeholders and delegates not to make any mistake at voting him come 23rd May, 2022, dousing the fear that instructions will be given to them on who to vote on the said day.

Responding, a critical stakeholder in Aba South, Mr Iro Kalu, assured that Aba South will vote massively for him on the day of primaries.

Meanwhile, in their separate speeches at Hotel De La Paix, stakeholders and delegates from Aba North including the Party Chairman, Hon. Atulegwu Simon, Prince Stanley Ogbonna, John Nwawike, and the woman leader, Fine Allison, appreciated Chief Omerekpe for making out time to interface with them. They described him as their own, assuring that they will vote massively for him.