Politics and governance go together. Politics, when well tailored, leads to electoral victory which guarantees positions and offices. 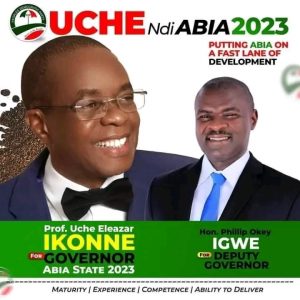 On the other hand, governance which is a state of taking charge and being in charge, is measured by performance and results.

Abia State has come at that particular point where she must be governed by a man who practically understands the importance of procedures and processes of democratic administration.

Looking at the leading candidates going into the 2023 governorship election in God’s Own State, it is very easy to point at Prof Uche Ikonne as the most qualified.

The reasons for this submission is not far too seek. Ikonne, whose professorial elevation was certified oversees didn’t just pick his academic qualification certificates by the roadside as some of his opponents did. He worked for it. He merited it. The interpretation here is that when elected, Ikonne will restore discipline, due process and merit in all the strata of Abia State for an effective and result oriented goals geared towards development.

Ever since he was called to the academia, Ikonne never looked the other side – political associations and appointments. He stayed glued to his duty posts where he mentored and inspired a generation of Abia and Nigerian students to stardom.

As a matter of fact, he served out his calling, an academic consequent upon which he headed the two biggest state owned tertiary institutions in Abia State, the Polytechnic in Aba and the University in Uturu.

You are well aware that those two appointments were made possible by two different governors at two auspicious occasions. The governor who installed Ikonne as Polytechnic Rector was not a ward of Ngwa nation. The meaning is, Ikonne reached that apogee not by manipulation but by merit.

If Prof. Ikonne could do it as a Rector and vice chancellor, with all the students’ reprehensible attitudes as an appointee, Ikonne will even do more as governor in an Executive position.

Remarkably, it must be pointed out that unlike the the motley crowd of party standard bearers masquerading as candidates, Ikonne has no dirty past. He is clean and decent. It goes to show that he will acquaint himself creditably when he gets the mandate of Abia electorate in 2023.

While one of the candidates is relying on a discredited group composed of sub – ethnic jesters that lie with the provisions of the sacred Abia charter of equity documents which has lend credence to Ikonne’s aspiration, an indication that he is coming to divide Abia State, Ikonne is seeing the entire area as his constituency. This is a mark of a true leader.

Even when the other party candidate is poised to import the replica of the the APC’s same faith ticket to Abia by using as his running mate, a man from his senatorial zone, Ikonne, by his choice of his running mate has proved to be a man who believes in equity, justice and fairness.

On the other hand, the other candidate though has a pending case ( s) in Court, he has the penchant to jump from one party to the other in the last 23 years without success. It said that he will be doing policy reversals as key issues if he should get to the government house.

However, the PDP candidate, Ikonne, who has been as constant as the Northern Star, will be visionary, focussed and performance driven.

Therefore, Ikonne is the best and Abia masses know this fact, QED .