President Muhammadu Buhari has ordered all heads of agencies, departments, parastatals, and Ambassadors with political ambitions in the 2023 elections to resign their positions. 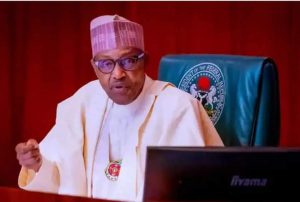 This is contained in a circular issued on Thursday morning, obtained by Goldmynetv

The circular was signed by the Secretary to the Government of the Federation, Boss Mustapha.

The circular with reference number SGF/OP/ I/S.3/XII/ 173 was titled, ‘Ministers, Heads of Government Agencies, Ambassadors and Other Appointees With Political Ambitions To Resign’. 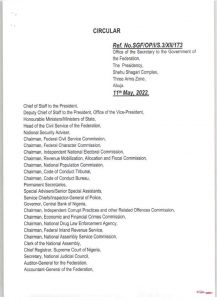 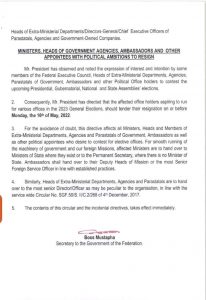 Others are; the chairman, the Economic and Financial Crimes Commission (EFCC); chairman, the National Drug Law Enforcement Agency, Chairman, of Federal Inland Revenue Service and heads of extra-ministerial departments, Directors-General/Chief Executive Officers of parastatals, agencies and government-owned companies among others.

In the circular, Mustapha said President Buhari had observed and noted the expression of interest and intention by some members of the Federal Executive Council, Heads of Extra-Ministerial departments, agencies, parastatals of government, ambassadors, and other political office holders to contest the upcoming Presidential, Gubernatorial, National and State Assemblies elections.

He said the President had directed that the affected office holders aspiring to run for various offices in the 2023 General Elections, should tender their resignation on or before Monday, May 16, 2022.

The circular said, “For the avoidance of doubt, this directive affects all Ministers, Heads, and Members of Extra-Ministerial Departments, Agencies and Parastatals of Government, Ambassadors as well as other political appointees who desire to contest for elective offices”