With the emergence of Dr. Iyorchia Ayu, a close associate of former Vice President and serial presidential candidate, Atiku Abubakar, as the new chairman of the Peoples Democratic Party, Emameh Gabriel interrogates the implications Abubakar’s quest to be the party’s standard bearer for the 2023 election 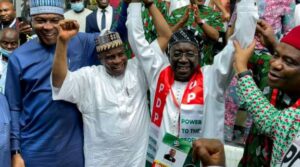 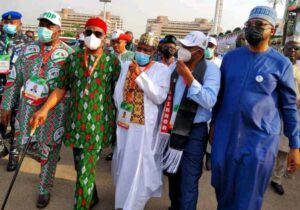 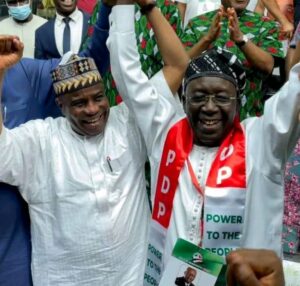 Former Senate President during the botched third republic, Iyorchia Ayu is the new chairman of the main opposition party, the PeoplesDemocraticParty (PDP), several weeks after he emerged as the consensus candidate of the North for the position. This came after intense wrangling and high level horse trading. The election of Ayu is widely seen as an auspicious occasion for the PDP in the build up to the next general election.

A former Education Minister under the military regime of General Sani Abacha and severally a minister in nascent days of the Fourth Republic under the erstwhile PDP administration of Olusegun Obasanjo, finally decamping from the PDP under controversial circumstances, particularly for his support for then Vice President Atiku Abubakar amidst Obasanjo’s third term agenda. The former Sociology lecturer, later became the former Vice President’s head of presidential campaign on the Action Congress, AC, platform in 2007. His emergence as PDP Chairman no doubt has the hand of Atiku in it, who viewed Ayu’s competitor, former Senate President, David Mark, as more imposing.

Ayu had never for once, hiden his support and loyalty for Atiku and had severally said Nigeria needs a modern president. In apparent support of the candidacy of Atiku Abubakar, he once said: “Atiku is a modern industrialist. Atiku has in recent times advocated restructuring.

“Restructuring also implies that states would be allowed to have their own Police because in a true federation, you cannot have only one Police force all over. From my discussions with Atiku, I believe strongly that some of these critical issues would be addressed fundamentally”

A supposed profile that has been further enhanced with Atiku’s latest acquisition of a Masters in International Relations from Cambridge University underlining the former VPs seemingly undying interest in pursuing his grand political ambition of becoming Nigeria’s president.

Turaki Adamawa as he is popularly called, a serial defector, was part of the new PDP faction that broke away from the then ruling party in 2013 to merge with other political parties and factions to form the All Progressives Congress (APC) that went on to defeat the PDP in the 2015 general election. He later returned to the PDP to clinch the party’s 2919 presidential ticket losing to President Muhammadu Buhari, the candidate of the APC.

Atiku recently said that Nigerians could not wait for 2023, so that the PDP could return to power. Though there are sections of Nigerians who are disaffected and discontented with the ruling party, the main opposition, the PDP has not and does not seem like a party that could capitalize on the situation, because its electoral defeat at the 2019 poll, like the APC, it has been dealing with recurrent crisis in its fold, a situation that dragged the party to the Apex Court while on convention ground. This in no doubt unconnected with the 2023 politics.

However, analysts opine that with Ayu’s election as National Chairman, that the party has displayed a willingness for a fresh start. Many had thought that since its shocking defeat in the 2019 general elections, the PDP would have started engaging itself in the process of re-engineering to see it bounce back to political power in 2023 but this wasn’t to be due to the power tussle that erupted in the party culminating in the removal of Uche Secondus as the party’s national chairman before the end of his term.

Atiku who has remained a frontline politician and power broker has not hidden his interest to try one more time for the most coveted office in the land. And from the looks of things, he has continued to be a force of unity and strategy in the party despite the strong opposition of governors on the party’s platform.

While in the APC, the zoning argument has been that since President Muhammadu Buhari, a Northerner served eight years as president, that power should automatically shift to the South. In the PDP, the arguments have taken several dimensions, with a major one alluding that in 16 years of PDP rule, the South has ruled for 14 years and that Jonathan completed the term of late President Yar’adua and was subsequently elected president. Thus giving the north the right of first refusal. But as seen in 2019, the North is not refusing, as it dominated the aspirants list at the PDP’s 2018 convention and from the look of things, it will do so again, especially with the clear prospect of throwing the eventual primary open for all.

But many analysts opine that if the PDP makes its primary an open contest, even before the coming on board of Ayu as party chairman, the former Vice President will replicate his 2018 feat of clinching the party’s presidential ticket. With Ayu now in place, the prospect has no doubt been greatly enhanced, even though the new chairman has been an advocate of transparency and due process in party administration, himself a victim of internal party injustice in 2007.

Within the party it is widely believed that Atiku is the one man that has the clout and deep pocket to match the ruling party and and any chosen candidate, even if it is the self acclaimed national leader, Bola Tinubu emerges as its candidate.

Despite his popularity and active presence on social media, Atiku has found it difficult to singlehandedly reign in on his party, especially during the crisis rocking that strained the opposition as forces battle for the party’s structure. Even before the alleged removal of Secondus as chairman, the PDP has been accused of not wanting to cede the presidential ticket to the Southeastern, a region, it is argued has supported the party since its formation from inception. A reason Governor Umahi of Ebonyi gave for dumping the party.

Alhough it is clear that this school of thought does not weigh heavy on a party in the opposition keen on returning to power, and plotting how to maximize its share of votes, many in its fold believe that handing a popular northerner the party’s ticket, particularly with the APC’s intent on zoning it to the South may make the difference.

Atiku, who clocks 77 in 2023 is considered by some as being too old for the plum job. So, he is likely to face staunch opposition from the party’s young turks, which will be centered around Governor Aminu Tambuwal of Sokoto State who will be ending his governorship term in the same year. Atiku who is frequently away from the county, has not always had it easy with the party’s governors forum and the recent rounds of visit in Port Harcourt, Delta, Akwa Ibom and Edo state may be a strategy to ingrate himself with them as isolation becomes increasing dangerous.

According to a group in the party, the PDP Action 2023, Atiku should seek to become the chairman of the party’s Board of Trustees (BOT) to provide counsel to younger PDP politicians. Speaking recently, its Chairman, Hon. Rufus Omeire, disclosed that since losing the 2019 poll to President Buhari, Atiku had relocated to Dubai and allegedly doing nothing to rebuild the main opposition party.

The group rejected a situation where he would only resume his association with party members just because the election is around the corner.

“It is a betrayal of trust for Alhaji Atiku Abubakar to neglect the feelings and sacrifices of ordinary voters who supported him and PDP in 2019.

“Now 2023 elections are once again at hand, he has returned and started politicking once again. Apparently, the only thing he is very good at is politics.”

While some gladiators in the party who were visible faces at the party’s presidential convention in Port Harcourt in the 2018 convention, are no longer too visible, it may be a matter of time before they re-emerge, re-group, and realign in their quest to clinch the ticket or form a winning alliance.

The elective national convention held on Sunday has witnessed the rising trend, with the emerging visibility of Sule Lamido, Bukola Saraki, Dankwambo and the likes.

With the growing disenchantment with the APC, as it stands Atiku seems like PDP’s best chance. With the clamour for Igbo presidency, and power shift, he would no doubt have to battle his way through a mounting web of intricacies. And who knows jostling may throw up new powers to the fore before 2022 presidential primary of the party, with a Wike – Tambuwal alliance an equally threatening scenario.