The tension and geopolitical strife between Russia and Ukraine assumed a terrifying dimension after Russian President Vladimir Putin launched a military operation in Ukraine on Thursday with explosions heard across the country. 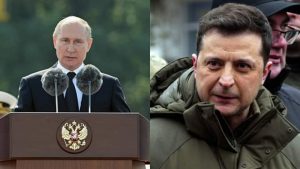 Many countries have called for a diplomatic way out of the current crisis between the two countries, but Putin has intensified further military action.

While there had been tensions between Russia and Ukraine, a former Soviet republic, for a long time, the situation began getting out of control in early 2021. 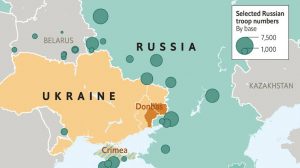 Here are points to know about the conflict between the two countries:

2. This angered Russia, which started sending troops near its Ukraine border for “training exercises” in spring last year and increased it during autumn.

3. Russia does not want Ukraine in NATO – and has said as much in its list of security demands which were sent to the US last December. The demands included a halt to any NATO drills near Russia’s border.

4. Ukraine is not a NATO member but it wants to be. NATO, which the United States, the arch-rival of Russia, is a part of, is the subject of heightened tension.

5. Meanwhile, NATO too, is open to make Ukraine its member because it is considered a partner of alliance.

6. The North Atlantic Treaty Organisation (NATO) was created in 1949 by the United States, Canada, and several Western European nations to provide collective security against the Soviet Union.

7. NATO is an intergovernmental military alliance whose purpose is “to guarantee the freedom and security of its members through political and military means”.

8. Ukraine’s growing links with the EU and the West has also been vehemently opposed by Putin.

9. By December last year, the US began to lament about the deployment of the Russian troops and President Biden warned of severe sanctions if Russia invaded Ukraine.

10. This is not the first time tensions between Russia and Ukraine has reached a boiling point.
Russia had invaded Ukraine in 2014 when rebels backed by President Putin had seized large swathes of easterrn Ukraine and have fought Ukraine’s army since then. At that time, Russia had annexed Crimea.

11. As a former Soviet republic Ukraine has deep social and cultural ties with Russia, and Russian is widely spoken there, but ever since Russia invaded in 2014 those relations have frayed.

12. Russia attacked Ukraine when its pro-Russian president was deposed in early 2014. The war in the east has since claimed more than 14,000 lives

13. Russia and Ukraine had signed the Minsk peace accord to halt the armed conflict in east Ukraine, including the Donbas region.

14. But as the conflict has continued, Russia explained that it is sending “peacekeepers” to the region where the conflict is brewing. The West calls it a smokescreen by Moscow to occupy sovereign territory.

15. The new tension between Russia and Ukraine, which also borders the European Union, has repurcussions for the EU. And that’s why the EU, most of who are NATO signatories have joined the US in announcing sanctions, against Russian entities.

16. Ukraine, which was part of the Russian empire for centuries before becoming a Soviet republic, won independence as the USSR broke up in 1991. It moved to shed its Russian imperial legacy and forge increasingly close ties with the West.

17. A decision by Kremlin-leaning Ukrainian President Viktor Yanukovych to reject an association agreement with the European Union in favour of closer ties with Moscow led to mass protests that saw him removed as leader in 2014.

18. Russia responded by annexing Ukraine’s Crimean Peninsula and throwing its weight behind a separatist rebellion that broke out in Ukraine’s east.

19. Ukraine and the West accused Russia of sending its troops and weapons to back the rebels. Moscow denied that, saying the Russians who joined the separatists were volunteers

20. Furthermore, Russian President Vladimir Putin has repeatedly said Ukraine’s aspirations to join NATO are a red line, and expressed concern about plans by some NATO members to set up military training centres in Ukraine. This, he has said, would give them a military foothold in the region even without Ukraine joining NATO.