There was anger on the faces of Enugu residents as the decomposing body of a man, his pregnant wife and three of his four children were discovered in the Amokpo-Nike Community in Enugu East Local Government Area of Enugu State.

Their corpses were discovered inside their apartment on Wednesday.

It was gathered that concerned neighbours, who noticed their unusual absence raised an alarm.

A resident said it was when they broke the window that it was discovered that the entire family had died and were already decomposing except the man’s first son who was unconscious.

According to him, “we decided to transport the bodies to St Basil Hospital close to the local government secretariat but they were rejected. So, we left it in the vehicle till this morning.

“We informed the state Ministry of Health, they came this morning (Thursday) and carried the corpses to the National Orthopedic Hospital Mortuary. They were also here this morning to decontaminate the man’s compound.”

It was gathered that the man’s first son who was found unconscious was responding to treatment at the same hospital.

The Man simply identified as Mr. Chukwumalu from Eziowelle, Idemili North Local Government of Anambra state was until his unfortunate death with his family, a building engineer who operated a block industry too. According to eye witness accounts, their corpses was discovered in a position suggesting that the man was trying to Protect his family which has continued to raise suspicion on the possible cause of death. 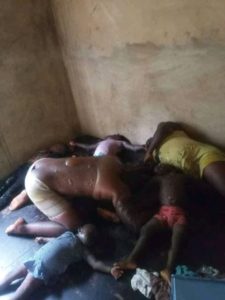 Meanwhile, authorities are yet to release an official medical report on the dead bodies. 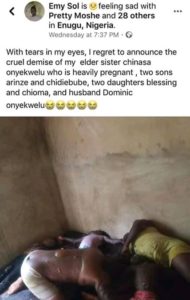 “The command’s knowledge of the unfortunate development followed a complaint received on April 29 at about 2.00 p.m. at Unity Police Station of a sudden and unnatural death of a ‘family of six’ at City Estate Layout, Amokpo-Nike, Enugu.

“The operatives of the station, led by its Divisional Police Officer, SP Siga Malgwi, immediately moved to the location where they saw them lying lifeless in a room.

“The building was cordoned off, while Enugu East Local Government Health Authorities were contacted for examination and evacuation of the bodies.
“However, in the course of disinfecting the building before the evacuation, the only son of the family, Arinze Onyekwe, was found to be in coma.

“Arinze was immediately rushed to the hospital where he is said to be recovering,” he said.

According to him, the corpses have been evacuated to the hospital for autopsies.

“Other members of the family whose bodies have been evacuated to the hospital for medical autopsy included: Dominic Onyekwe, husband; Chinaza Onyekwe, wife, who is suspected to be pregnant; Chioma, Oluebube and Blessing, their daughters,” he said.

The official also said that the commissioner of police had ordered an investigation to ascertain the cause of their deaths.